Ezra, Jesus is a symbol of ultimate humanity, of community and a sense of universal brotherhood.

For you, maybe, and I don't really have a problem with that---but a lot of people in history could serve that function. I'll be clearer---the thing that sets Jesus apart from all the rest of the pack is that he symbolizes beating death. Without the resurrection and that that implies, he wouldn't have been any different than any other harmless prophet of his day or any Siddharta that walked away from his fortune.

Precisely, which is exactly why the criteria that the Apostle Paul taught made one a christian was whether or not you believed that Jesus rose from the dead. What made you an apostle was that you had actually witnessed the resurrection (by having a post-mortem vision of Jesus; as far we can tell no one claimed to have actually seen Jesus come out of the grave). It may be my upbringing talking but I've never understood how anyone could claim to be a christian and not believe that Jesus rose from the dead. As you say Mark, wasn't that the whole point? Anyway the day I realized I didn't really believe it was the day I stopped calling myself a christian.
“We must not always talk in the marketplace,” Hester Prynne said, “of what happens to us in the forest.”
-Nathaniel Hawthorne, The Scarlet Letter
Top

Mark, you might add that the power of the myth of Jesus is not only that he beat death, but by accepting him and following him you will beat death, too. Well, at least you'll beat an eternity burning in hell. If you judt say yes to Jesus, so the, promotional material goes, your "soul" will live on forever -- and the churches relentlessly remind you that the soul is the most "real" part of you. And you have to do so little in return. Why wouldn't millions of people buy into a deal that allows their "true" selves to continue existing after their shabby old bodies have turned to dust?

I suspicious of this deal precisely because it's what people want to believe. (Although, for my part, I sympathetic.to H. G. Wells's comment, "No, one life is enough for little old H. G.")
"Thought is a strenuous art -- few practice it, and then only at rare times." - David Ben-Gurion
Top 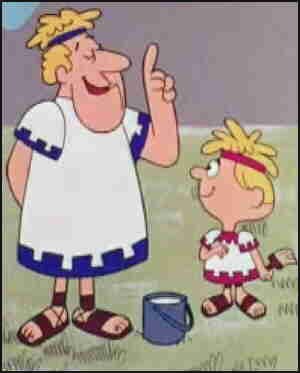 There was a man named Aesop.

He wrote a collection of fables circa 600BC.

I'd like to jump back to Ezra's quote to draw an analogy here:

The Jesus that actually lived appears to have been a Jewish apocalyptic preacher who taught that the world was about to come to an end and that everyone should drop out of society and form a community to get ready for the end.

The problem is we don't even know THAT much! No texts were written down by historians or witnesses of the events! NONE. The ONLY existing documentation that was in any way connected with the period was, apparently, called the Pilate Stone. It confirms the historicity and title of Pontius Pilate. According to what I've read, it includes "a brief mention by Tacitus; Philo of Alexandria; Josephus; the four canonical gospels; the Gospel of Nicodemus; the Gospel of Marcion; and other apocryphal works. Based on these sources, it appears that Pilate was an equestrian of the Pontii family, and succeeded Valerius Gratus as prefect of Judaea in AD 26. Once in his post he offended the religious sensibilities of his subjects, leading to harsh criticism from Philo and Josephus. According to Josephus, he was ordered back to Rome after harshly suppressing a Samaritan uprising, arriving just after the death of Tiberius, which occurred on 16 March in AD 37. He was replaced by Marcellus."

That's IT! That seems to be the nearest they'd ever found to the recorded events of Jesus. The next 2000 years was built on the "gospels"; texts written for the first time generations later around 70AD. And about a hundred miles away. The Gospel authors were writing for an audience who did not live at the time or place of the events they were narrating. The assembled the narrative of Jesus' trial and death, giving it historical context of his life and mission.

The fact is, then, the Story of Jesus is a parable. A fictitious narrative with lessons, much like Aesop. Since 99% of the story is invented, then Jesus can ONLY be a symbol. It's the only context I can use in a discussion.

To my mind, the figure is a symbol of altruism. Since it is referred to as such by so many self-proclaimed Christians as well who, like Teabaggers and Neocons, blurt out as much while crushing as many resources for the poor as they can, I like to use the symbol to rub their hypocritical faces in it. A symbol is a powerful weapon.
Top

Well rob you're leaving out the earliest New Testament documents we have, the letters of the Apostle Paul. Scholars date most of them from the 50s AD which would only be about twenty years after the traditional date of Jesus' death. He claims to have met Peter, Jesus' chief disciple and James, Jesus' brother. I have read considerably in this field and definitely have an opinion but I'm not a New Testament scholar or a historian. If you want to read a book by one such who gives his reasons why he thinks Jesus was a real person and that we can actually say something about what he might have taught, let me recommend a recent book by Bart Ehrman called DID JESUS EXIST? which addresses this very issue. There are compelling reasons to think Jesus was a historical figure. And Ehrman is an atheist so no one can accuse him of being slanted because of his beliefs. In my opinion it's just the simplest explanation for what what we do know about the origins of christianity.


One point that does need making though. People often respond as you do to the date of the gospels and their assumed authority. The first gospel written, Mark (and its a story in and of itself how scholars can figure that out) was probably written around the time of the first Jewish war, circa 70 AD. And it was probably written in Syria (or possibly Rome) by a Greek speaker to gentiles. Our earliest copies date from the second century. But what people don't realize is that for ancient documents this is actually pretty amazing. Our earliest copies of Plato and Aristotle and Julius Caesar date from only about 900 AD. That's AD! And for Plato and Aristotle we have only ten copies of their works that old. Ten copies! Our knowledge of the ancient world is sketchy at best. So if we're going to be skeptical about Jesus, fine, but we at least have to be consistent. There's just as much (or little) evidence for other historical figures whose existence no one would question.
“We must not always talk in the marketplace,” Hester Prynne said, “of what happens to us in the forest.”
-Nathaniel Hawthorne, The Scarlet Letter
Top

Ok, but, again, there's no documention that actually recorded the events as they took place. That's the big problem I would think! There's nothing to show Jesus is much beyond a parable. CERTAINLY not in terms of the narrative as we've been handed it! THAT'S a genuine TALE, although a great one!

What irrefutable documentation from his lifetime proves this particular preacher truly lived and the events happened as claimed? That's my query. Testaments and gospels prove nothing. Oral recounts 2000 years ago don't lend evidence. Nor can authors writing of the events years after they happened, and by people who in turn were handed stories about it orally second hand. It's that simple. Now, I've no plans on delving into it much further. I've enough priorities; although history fascinates me, theology doesn't. What segment of the writings strikes you as any solid evidence?
Top

Okay, for those of you who think otherwise, evidence that people of the cloth have a sense of humor.

A good friend of mine is an Anglican Priest. She loves to swim, particularly outdoors in lakes, rivers and the ocean. It's one of her passions.

Today it's raining and thundering where she lives. I commiserated and told her I'd file a formal complaint.

Her response: "Not sure I can Steve - I work in Sales not Management!"

Coffee through the nostrils. Just saying'.
- I love to find adventure. All I need is a change of clothes, my Nikon, an open mind and a strong cup of coffee.
Top

She shows that Christians are true wits. Tell her I'm on her team.

Rain falls on the just and unjust.
Top

Pretty funny, Barber. I once new a minister who when asked what he thought of the "end times" prophecies said that he couldn't give a good answer because he was on the greeting committee not the planning committee.


Rain falls on the just and unjust.

True, Frank, true. Which is exactly what you would expect if no one was in charge. Now if it only rained on the bad people that would be worth noting.
“We must not always talk in the marketplace,” Hester Prynne said, “of what happens to us in the forest.”
-Nathaniel Hawthorne, The Scarlet Letter
Top

Now if it only rained on the bad people that would be worth noting.

Anybody remember THIS guy?

“We must not always talk in the marketplace,” Hester Prynne said, “of what happens to us in the forest.”
-Nathaniel Hawthorne, The Scarlet Letter
Top

Those pictures are, to coin a phrase, grossing me out.
"Thought is a strenuous art -- few practice it, and then only at rare times." - David Ben-Gurion
Top

Why, it's the American voters!
Top

Andrew created a monster when he posted the instructions on how to include pictures in these posts. Uh...several monsters...heh heh heh.

Here's a picture of a ship that broke in half and is still smoking.

“We must not always talk in the marketplace,” Hester Prynne said, “of what happens to us in the forest.”
-Nathaniel Hawthorne, The Scarlet Letter
Top
Locked
8452 posts

Users browsing this forum: No registered users and 5 guests